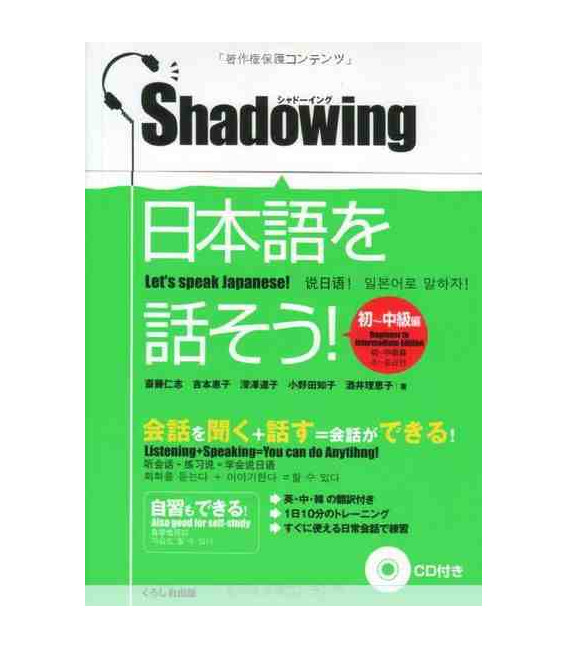 Shadowing is a form of training that is designed to help improve simultaneous interpretation. However its effectiveness is not limited to this area and with its simple method, beginner students will also gain great value from it. Whilst listening to a flowing conversation, being able to 'shadow' the conversation by repeating immediately afterwards is what we have called the Shadowing learning method.

"I want to be able to speak Japanese easily!", "I want to speak fluently!" We believe that there are many Japanese language students who share these desires. Another opinion that we often hear is, "I understand what people say to me, but I can't speak myself". Shadowing acts as a bridge between understanding what you want to say in your mind and being able to actually say it out loud promptly and fluently. To express this differently, Shadowing is a training method that raises ability from intellectual understanding to practical application. This difference can be compared to knowing the theory of how to swim and actually consciously experiencing how to move your arms and kick your legs in the water.

The results of applying the Shadowing method

1) Shadowing is quite an intensive learning method where you listen and speak at almost exactly the same time. If you practice Shadowing for even a short period of time every day you'll be able to process Japanese at a higher pace and soon you'll be able to practically use and apply the learned dialogues. When learning a new language of course you'll have to learn it's grammar and vocabulary, but generally speaking you'll soon find that

By using the Shadowing learning method, in a very short time you'll become able to process Japanese at a higher speed and also see improvements to your listening and reading skills.

2) Shadowing exercises your ability to pronounce Japanese in the same manner as a native Japanese person. By practicing regularly, your intonation will improve without your being consciously aware of it. It is of course true that if you consciously exercise your intonation then you will notice the effects. However, even without concentrating on your Japanese intonation, significant improvements will be made..

These materials are targeted towards beginner and intermediate Japanese language students.

65 minute CD included. A transcript of the CD contents is included in the book in Japanese, English, Chinese and Korean.